Well, that was a great party!!!! I first got the idea of this theme from a very talented event planner in the Salt Lake City area, Brittany Egbert (check her out at onecharmingparty.com) She threw a trophy husband party for her hubby's birthday. I thought it was such a cute idea and decided to transform it from a birthday party to a Father's Day celebration. It was great. Lots of laughs, the guys were such great sports about everything and we had so much fun!!! I've got a ton of pictures to share so here goes....
First off, the cake/cupcakes... 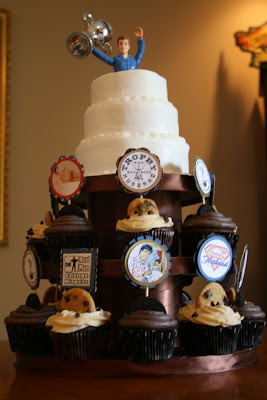 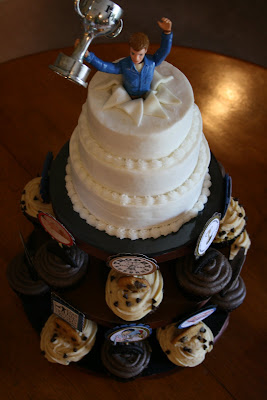 I just love these cupcake toppers... 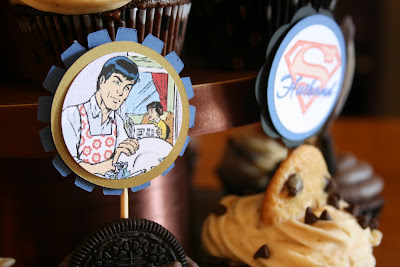 The flavors were chocolate chip cookie dough and oreo. 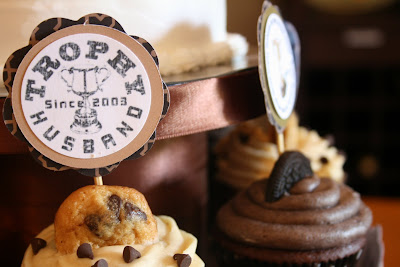 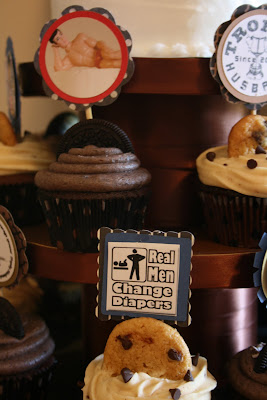 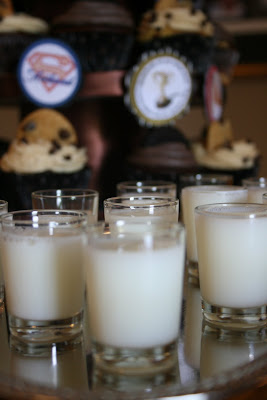 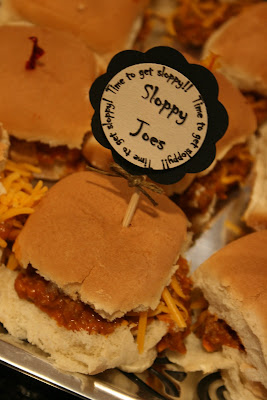 I served a few appetizers, tried to stick to a "man food" menu of sliders, sloppy joes, pigs in a blanket and a 7 layer dip...

The trophy husband kit. This made for some good laughs when opened!!! 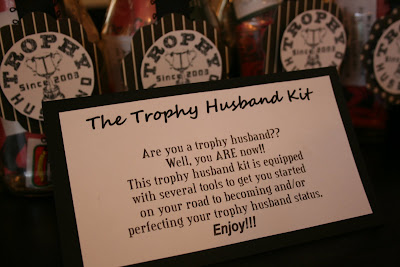 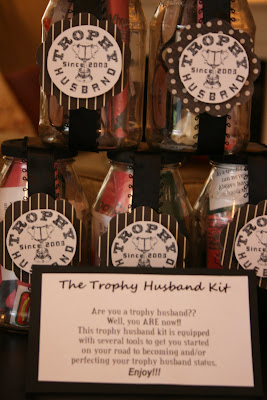 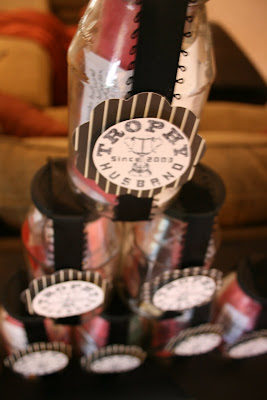 Some of the contents included: 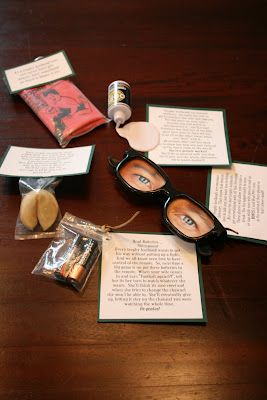 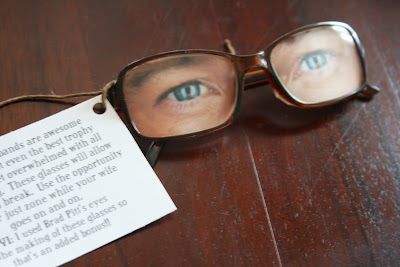 Austin, demonstrating how the glasses work... 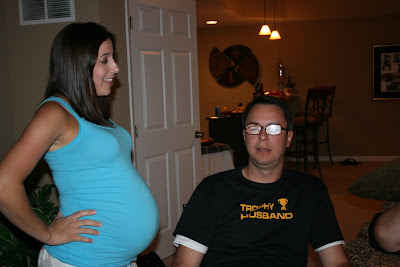 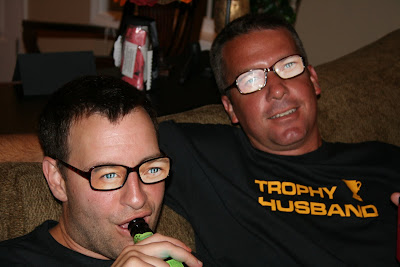 A whoopie cushion, because everyone knows that trophy husbands don't have gas... 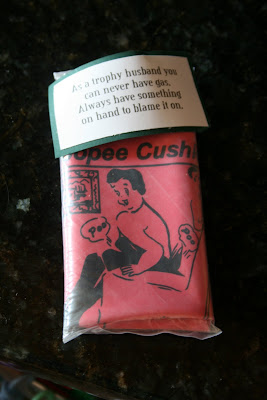 Put this mess on your wife's favorite rug and watch as she freaks out. Tell her to go relax, you'll take care of it. 10 minutes later call her in the room to show her how you just cleaned up the worst stain ever! You're a miracle worker!! 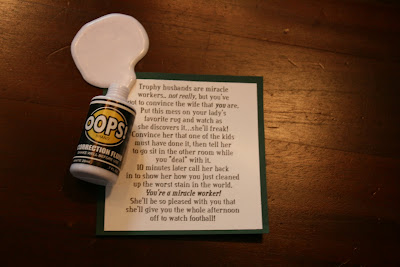 Other goodies in the kit included dead batteries, to put in the remote control so your wife can't change the channel while you're trying to watch a football game.

And a fortune cookie...with a helpful fortune inside. ;)

The guys and their trophy husband shirts I ordered for the party. It was so fun watching them all hangin' out in their matching shirts. lol 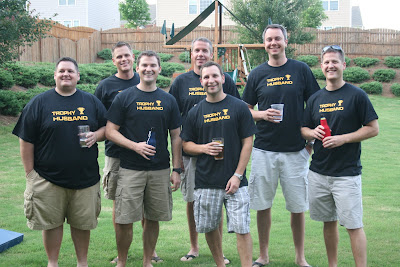 We had the guys do a couple "competitions" to prove their trophy husband-ness. First up, dizzy bat. So awesome! I haven't played dizzy bat in Lord knows when. The guys split up into two teams. They had to chug a few ounces of beer, then spin around 4 times, run to one cone and then back. This game made for several sore bellies from laughing so hard!!! 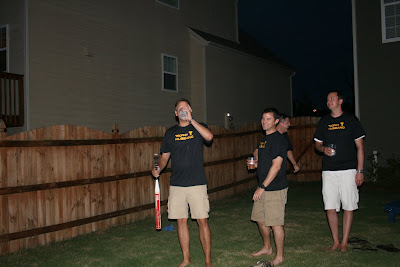 Denny and Jeff celebrating b/c they just won. Cheaters... ;) 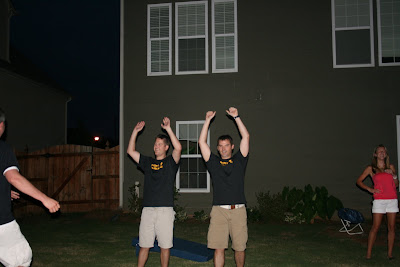 Then we went inside and played the newly wed game. This ended up being hilarious and probably my favorite part of the whole night. Denny was the winner and took home the coveted prize of a calendar of all the trophy husbands. 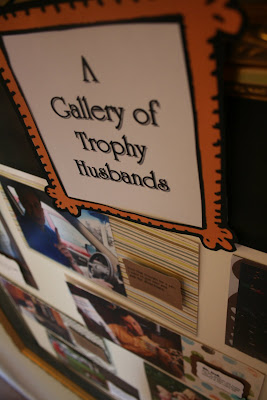 I had the Gallery of Trophy Husbands up... (see previous trophy husband post for explaination on this one) 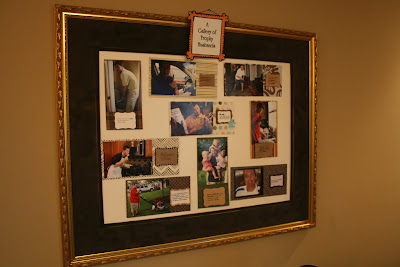 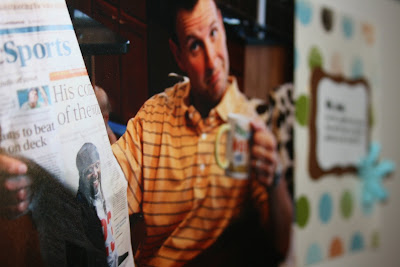 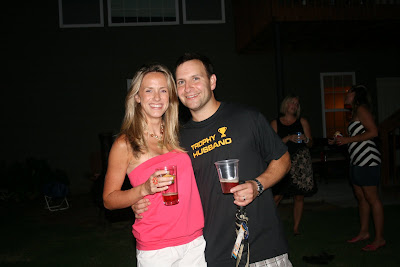 Me and MY Trophy Husband. :)


Gosh what a great party! It was a great way to celebrate Father's Day with all our awesome hubbies. Happy Father's Day to all you awesome daddys out there!!!!!