People always ask my why I don't do wedding cakes. My answer is always the same...TOO STRESSFUL!! I'm terrified of encountering a huge cake disaster, one that would say, demolish a cake! And then having bridezilla take her vengeance out on me...its just not worth it.

I've been doing cakes for over a year and this weekend I had my first major cake disaster. :( I was able to recover from it somewhat painlessly, but I was reminded of why I have come to my decision. I don't think I could have recovered so easily if it were a 5 tier wedding cake!! EEK!

So anyway, here is my cake disaster...it was bound to happen one of these days!! :(


Here is the before....
A Cookie monster cake.
Happy Guy. Just minding his own business, eating his cookies and crossing his eyes.
. 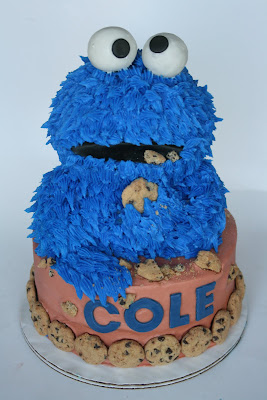 He even brought along his little brother, aka the smash cake... 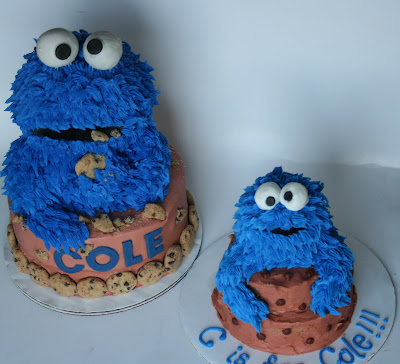 Things were going great. My girlfriend from high school came to pick him up, she loved him.
We chit chatted and then said our goodbyes...
About an hour later I got this. A picture in my email. :( 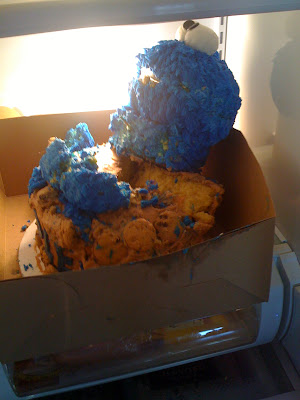 Poor cookie monster! We're not sure what happened. She promised she didn't slam on the brakes and/or flip her vehicle on the way home. My guess is he was not happy with the cookies I supplied him with and his monstrous appetite pressured him into eating the lower tier. :( He HAD to have it!
Its all pretty ironic if you think about it. Violently tearing into anything that resembles a cookie is what he is known for.

So I had Cole's mommy bring Cookie monster back home so we could have a good "talkin' to"!
A couple hours later he was repaired and honestly I think better looking than even before. I cannot believe it but I forgot to take an after-after picture. I have the before, the after, but no after-after picture! :( I'll have to get one sent to me, because like I said he repaired and better than ever!
Luckily this fell on the night before the party so there was plenty of time to repair! If it happened on the day of the party there would be little to no hope of anyone forgiving Cookie Monster for his terrible impulses!!

And THAT is why I don't do wedding cakes!

Luckily this all happened on a night that Bailey had her BFF Katelyn over for a spend the night party. The girls kept each other entertained while I tried to salvage what was left of the cake. In between baking and re-icing the lower tier of this cake we played beauty shop up in my bathroom. "Beauty Shop" consists of painting nails and doing each other's hair. "Doing" hair to these 4 1/2 year olds means you brush, spray perfume, body spray, glitter, lotion, hair mousse, detangler, hair spray... pretty much anything you can find in the bathroom you put in the other one's hair. As long as it doesn't make your hair fall out or change its color, its fair game. So after they were done doing each other's hair they did Olivia's.
Not sure which disaster is worse...Cookie Monster or Olivia's hair?!?!!? 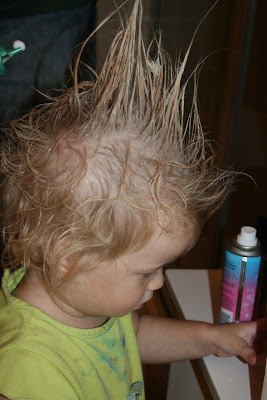 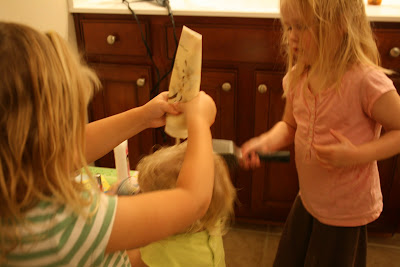 Olivia at the Beauty Shop.... 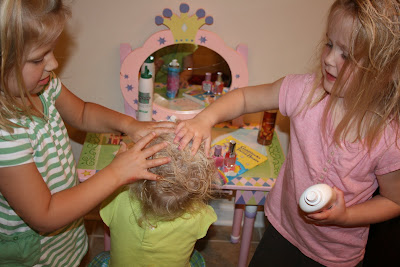 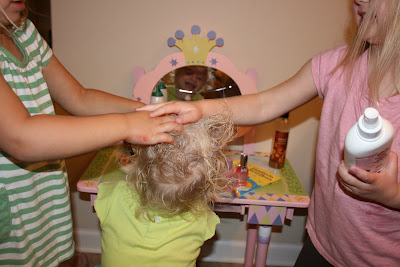 What a crazy night!! Friday nights certainly look a little different to me these days! :) 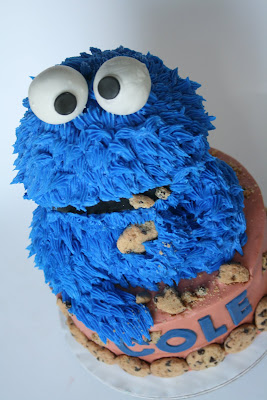